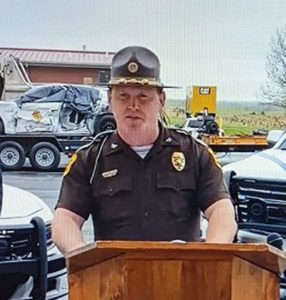 Heavy traffic is expected on Iowa’s roads this Mother’s Day weekend, and the Iowa State Patrol is taking part in a highway safety initiative.

Patrol Colonel Nathan Fulk says they’ll focus on unsafe drivers, which includes speeders and those who fail to move over for emergency vehicles.

Eighteen Iowa State Patrol vehicles have been struck by passing motorists in the past two years. The Special Traffic Enforcement Program runs today through Sunday. Fulk says there’s a priority to reduce crashes that cause injury and death, not just this weekend, but permanently.

“The Iowa State Patrol’s goal is to change driver behavior by bringing awareness of the dangers associated that we face each day on the roadways,” Fulk says. “We are asking the public for your help to keep our roadways safe. A few tips to remember: Put the phone down. Slow down, buckle up, and please move over, so together, we can save lives.”

Iowa’s “Move Over” law means when a motorist encounters any vehicle with flashing lights on the side of the road, they must either move over safely or slow down by at least 20 miles per hour.