You are here: Home / News / Greyhound racing comes to an end in Iowa

Dogs lining up for race. (photos by Bob Fisher.)

Greyhound racing in Iowa ended its 37-year run Sunday as the final races were held at the Iowa Greyhound Park in Dubuque.

Greyhound races started there in June of 1985. The Iowa legislature approved a plan seven years ago to phase out the greyhound parks in Dubuque and Council Bluffs due to the decline of the sport nationwide.

Dubuque Racing Association president and CEO Alex Dixon credited the community in the early 1980s for taking a chance on bringing greyhound racing to town to help revitalize Dubuque. “What we did as a community is that we saw that when we were in midst of losing our population, when we were losing hope, we came together,” Dixon says. “A board comprised of people from the City of Dubuque came together, went to the city, knocked on doors, went and raised $7 million to build this facility, to help turn the tide.” 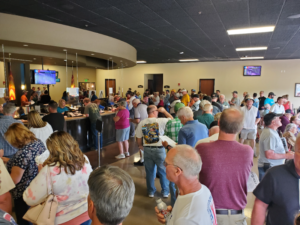 Association board chair Kevin Lynch says the non-profit greyhound track has had a tremendous impact on the governments and charities in the Dubuque area. Lynch says, “This facility has sent over $223 million to the city of Dubuque, $9.1 million to Dubuque County, and over $60 million to local charities.”

With the Iowa Greyhound Park closing and the Southland Casino Racing track in West Memphis, Arkansas, also planning to end live races this year, that will leave just two tracks in West Virginia as the only greyhound racing tracks still operating in the United States.