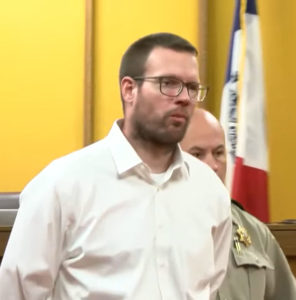 Michael Lang leaves the courtroom in handcuffs following the verdict.

The jury took less than three hours today to reach a verdict in the trial of 42-year-old Michael Lang of Grundy Center.

Lang was accused of shooting and killing Sergeant Jim Smith during a standoff last April. Judge Joel Dalrymple read the verdict sheet. “In the District Court for Grundy County concerning count one the verdict form reads — we the jury find the defendant guilty of murder in the first degree.”

Lang was also convicted on two other charges for shooting at a police vehicle and for the assault on a Grundy Center Police officer which started the who chain of events. “Concerning count two, we the jury find the defendant guilty of an attempt to commit murder. Concerning count three, we the jury find the defendant guilty of assault on a peace officer with intent to inflict serious injury,” Dalrymple read. Lang will be sentenced to life in prison and will be held without bail until sentencing.

The proceedings ended soon after the verdicts were read. The judge asked the foreperson if this was in fact the jury’s verdict and he replied “Yes.” Neither side asked that the jury be polled and the judge dismissed the jury. “Ladies and gentlemen, then that does excuse you from your service as a jury. We’re going to send you back to your jury room one last time. In a moment. I’ll be back there to talk with you. On behalf of everybody involved. We want to thank you for your service,” he says.

The attorneys will discuss a sentencing date with the judge. The trial was held in Hamilton County at the courthouse in Webster City due to publicity about the case.