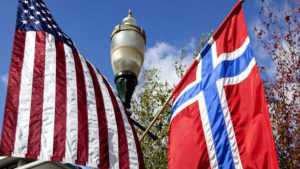 The flags of the U.S. and Norway.

A celebration is underway today in the northeastern Iowa town of Decorah to mark Syttende Mai — or the 17th of May in Norwegian.

On this date in 1814, Norway’s constitution was ratified, declaring its independence from a union with Sweden. Chivonne Marlow, with Vesterheim in Decorah, says there’s a full slate of activities for adults and kids.

“They can watch a presentation from a woman in Norway whose name is Anna Elisebeth Skogen and she’ll be presenting about her experience as a teenager with Syttende Mai,” Marlow says. “We also have storytelling for children. They’ll have Nordic folk tales and stories.”

A mini-parade is planned this afternoon, along with demonstrations of Nordic dances and songs. Vesterheim, which means “Western Home,” is the National Norwegian-American Museum and Folk Art School. It boasts the most extensive collection of Norwegian-American artifacts in the world. Marlow says the facility houses more than 33-thousand artifacts.

“We have a lot of things related to folk arts,” she says, “and that’s one of the things that we really try to preserve here at Vesterheim, the folk art traditions, and that is the point of our folk art school here.” Those traditions cover things like jewelry making, knife making and carving, while the artifacts include elaborate costumes, intricate butter molds, colorful paintings, silver wedding crowns and woven tapestries.

The museum complex also contains a library and archives, as well as 12 historic buildings.
“We have actually some cabins that show a home in Norway, and then a home in America after someone emigrated,” Marlow says. “We also have a ship gallery, where two Norwegian brothers sailed a very, very small 25-foot ship from Norway, and that’s part of the collection as well.”

Admission to Vesterheim is free today.