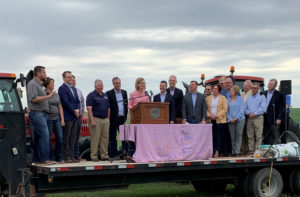 Governor Kim Reynolds has signed a bill into law that will significantly expand the number of Iowa gas stations that sell E15 — fuel that has a 15% ethanol blend.

“This historic bill makes Iowa the first state in the nation to adopt an E15 standard, setting the stage for the single largest expansion of biofuels in our state’s history,” Reynolds said, adding a whoop of her own as the crowd around her applauded.

Stations that sell less than 300-thousand gallons of gasoline annually or have older tanks and pumping systems that are not compatible with ethanol can apply for waivers, but the rest will have to start selling E15 by 2026. The law also requires most retailers that sell diesel to start selling B20 — diesel with 20% a soybean-based additive.

Reynolds signed the bill on a farm near Prairie City. Representatives of the biofuels industry and farm groups as well as several legislators were there. “For well over a year we’ve been working on different versions of this bill,” Reynolds said, “and the final product is truly a tstament to the idea that good faith discussion, negotiation and compromise can pay off in a big way.” 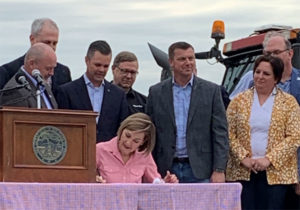 Reynolds said rather than electric vehicles, biofuels are the “true answer” tor energy independence and security for the United States. “Biofuels account for $4 billion of Iowa’s GDP and supports tens of thousands of jobs in our state. It powers our economy and fuels the world and this position of global leadership means this reverberates far beyond our borders,” Reynolds said. “When we talk, people listen and we’ve never spoke more loudly and more clearly than we are today.”

Will Cannon, a district director in the Iowa Corn Growers Association, hosted the event at the century farm where he’s grown crops for the past 20 years. “As a farmer here in the state of Iowa, this bill means a lot to me,” Cannon said. “Ethanol means a lot to me…Ethnoal is one of those markets that helps to get good prices so someone like me has an opportunity to farm.”

The law requires any gas stations that are built after January 1, 2023 to immediately have pumps that dispense E15. The plan includes additional state grants for stations that install blender pumps and equipment that can handle higher concentrations of ethanol and biodiesel. Tax credits for fuel retailers are in the legislature and it also doubles the biodiesel production tax credit.

“It makes needed improvements to our renewable fuels infrastructure program and, honestly, it couldn’t have come at a better time,” Reynolds said. “Iowans are anxious for alternatives.”

The price of E15 is about 10 cents less per gallon, sometimes lower in rural areas. E15 is often identified at “Unleaded 88” on a pump and someone from the Iowa Corn Growers Association brought cookies to the event that were decorated with the number 88.