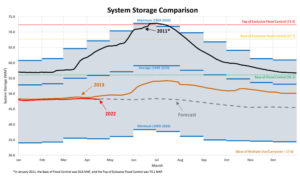 Due to low runoff into the Missouri River basin, the U.S. Army Corps of Engineers predicts power production from the six main stem dams will be about 77% of normal this year.

Electricity from the dams is distributed through the Western Area Power Administration, where spokeswoman Lisa Meiman says despite the hydropower shortage, they will meet power demand.
“Those long-term contracts with our power customers require us to provide up to a certain scheduled amount of energy each year,” Meiman says. “If we don’t have enough hydropower to meet those contractual obligations, we need to purchase power from other providers to make up the difference.”

Meiman says they normally need to add to their power portfolio, buying some power every year because the capacity doesn’t always meet customer needs. “There’s always some purchase power every year and in order to meet up with the demand for of our customers,” Meiman says. “This means we’re going to be probably purchasing more on the market than we would if we had an average hydropower year in order to make up the difference between our contractual amounts and what our customers are getting in terms of hydropower.”

Meiman says they supply power to many rural customers, serving primarily municipalities, rural electric co-ops, irrigation districts, Native American tribes and state and federal agencies.
“One thing to note is that these are typically smaller customers,” she says. “They live in mostly rural areas, and they are a community-owned power, meaning, we’re not selling to investor-owned utilities. We sell to communities that run their own electric utilities or there are cooperatives who are a bunch of municipalities that have banded together to serve themselves collectively.”

The hydropower is supplied to Montana, North and South Dakota and parts of Minnesota, Iowa and Nebraska.