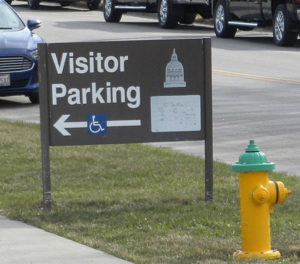 “As many of you know, we have had a number of threats on this building,” Petersen said during a Senate Appropriations Committee meeting yesterday.

A 23-year-old man was charged with vandalism in early 2020 after breaking into the Capitol on a Sunday morning. Surveillance camera footage showed he made it all he way onto the floor of the Iowa Senate.
Petersen said the added security for the Capitol as well as the state office buildings that surround it is warranted.

“Those that work in state government on the complex deserve to know that they should be safe,” Petersen said.

Iowa is among the 30 state capitol buildings with metal detectors at the doors where visitors enter. The screening devices and security guards have been deployed at the state Capitol for more than 20 years. Last year, a security fence was installed around Terrace Hill, the governor’s mansion in Des Moines.