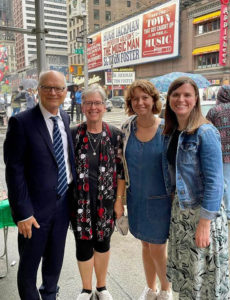 Mason City’s mayor has just returned from a trip to New York City where he presented the “Key to the City” to the cast and crew of the current Broadway production of “The Music Man,” which was created by Mason City-native Meredith Willson.

Mayor Bill Schickel says he had a fabulous time along with his family and others from Mason City in representing the community.  Mayor Schickel says, “My counterpart, Mayor George Shinn, played by Jefferson Mays, a Tony-award winning actor in his own right, I was able to present the key to him in a ceremony right before the show and extend an invitation to him and the rest of the cast to attend our Band Festival next year.”

It was a “very warm welcome,” Shickel says and it made him proud to be a Mason Citian. Wednesday was the 120th anniversary of Willson’s birth. Schickel gave a rave review of the musical.  “It was beyond fantastic,” Schickel says. “Honestly, I’ve never been to a Broadway show before, but it was very…I mean…all the actors…it was exciting! It just made me proud to be from River City.”

The musical premiered on Broadway in December of 1957, running for 1,375 performances before closing in April of 1961. A 2000 Broadway revival ran for just under 700 performances. The current Broadway revival began previews on December 20th and opened on February 10th and has received six Tony Award nominations, including “Best Revival of a Musical.”