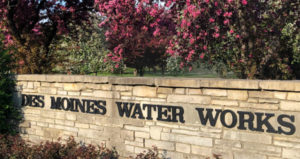 Iowa’s largest water utility has begun operating its nitrate removal facility, as nitrate levels have spiked in the rivers that are the source of drinking water to 600,000 customers.

“It isn’t as easy as just flipping a switch,” said Ted Corrigan, general manager and CEO of the Des Moines Water Works, “but we’ve tested everything fairly recently and we can put the whole process into action pretty quickly, within a couple of hours or so.”

“It’s not uncommon at all for us to see high nitrogen concentrations in both the Des Moines and Raccoon River when we have a wet spring following a dry fall or a even dry year, like we had last year,” he said, “so it’s not really a surprise, but we are seeing nutrients that are coming off the landscape after basically having been stored there during the dry conditions of the last couple of years.”

Employees are monitoring the processed water that is pumped to customers and Corrigan emphasized that it is safe to drink.

“Customers shouldn’t notice any difference in the treated drinking water,” Corrigan said. “It meets all the federal drinking water standards.”

It costs about $10,000 per day to operate the nitrate removal equipment. “The length of time that we’ll have to run the facility is very dependent on how much flow we see in the river and the temperature,” Corrigan said.

Corrigan expects the operation to run for several weeks. The last time the nitrate removal facility at the Des Moines Water Works was running was in 2017 and what was removed was diluted and returned to the river.

“We’re no longer able to do that and not because of the nitrate, but because of the chloride that’s in the waste stream. We don’t want to put that back in the river,” Corrigan said, “so now we actually have a pumping station that sends that waste stream to the wastewater treatment plant and they run it through their process.”

Due to nitrate runoff, Corrigan said tests on Tuesday started to show the utility’s river water source had nitrate levels close to the federal cutoff for safe drinking water, so the nitrate removal facility began operations.

“We literally need millions — 10 million, 15 million acres of cover crops in the state. We need thousands of saturated buffers. We need hundreds of wetlands across the state,” Corrigan said, “and those practices are being implemented across the state, but not at a scale to see a measurable difference in water quality.”

On Monday night in Grinnell, there was a “catastrophic failure” in a large water pipe and nine-thousand customers of Grinnell’s water utility were advised to boil water before drinking it. The pipe rupture was repaired, the water tower refilled and tests of water in eh system showed no bacterial contamination, so Grinnell officials lifted the boil order on Thursday.