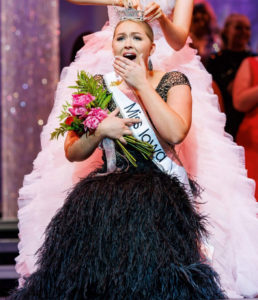 A middle school teacher from Urbandale was crowned the new Miss Iowa over the weekend to conclude the three-day scholarship competition in Davenport.

Twenty-four-year-old Bailey Hodson says when they called her name as the winner, she went completely numb and had no idea what to do, even though they’d practiced everything with each contestant during rehearsals.

“Luckily the Teen and Miss Iowa of the previous year, they’re so great. They just shuffled me across the stage and they’re like, ‘Okay, now we’re gonna put the crown on your head and just hold really still.’ I just had so many emotions and thoughts running through my head,” Hodson says. “I was like, ‘This is crazy. I’m going to Miss America. I’m going to be Miss Iowa,’ and it still really hasn’t sunk in completely.”

Hodson says she’s stepped into a wonderful whirlwind and knows the next year ahead is going to be exceptionally busy. “I will resign from Urbandale in my teaching position but my students were really excited and they knew all about the program and what I was doing and they’ve been rooting for me,” Hodson says, “so I don’t think it’s going to be a sad farewell but more of an exciting adventure to pursue.”

Hodson, a Berwick native who graduated from Grand View University in 2020, hopes to return to teaching once her duties as Miss Iowa are finished. Her platform, what’s now called a social impact plan, is focused on an anti-bullying campaign.

“I want within my initiative to really implement these curriculums within schools to combat the imbalance that bullying creates within our classrooms, and educate teachers on what they can do to see warning signs of bullying going on in their classrooms,” Hodson says. “So, I think I would love to tie that more into what I do already as a teacher.”

Her vocal performance for the competition was singing “A Million Dreams” from the musical “The Greatest Showman,” though she’s not sure if that’s what she’ll perform during the Miss America Pageant in December. An  Iowa contestant has never won the national event and Hodson says that’s not yet on her radar.

“My mind is completely overwhelmed with joy of just having the opportunity to even go,” Hodson says. “I know that so many people would have loved to have this opportunity. I’m just trying to really soak that in and be grateful that I’m even going. Becoming Miss America just hasn’t even really crossed my mind yet to be honest.”

Part of the prize package for Miss Iowa is more than $12,000 in scholarships, money Hodson plans to apply to her student loans.