You are here: Home / Business / Wisconsin company to make bacon in Davenport 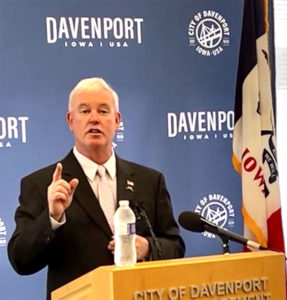 A Wisconsin-based food company is expanding with a new plant in eastern Iowa. Davenport Mayor, Mike Matson, made the announcement today.

“Fair Oaks Foods is planning to construct a state of the art food production facility that will create 247 new jobs,” he says. The company is based in Pleasant Prairie, Wisconsin. Mayor Matson says they will invest 134 million dollars for the 150,000 square-foot facility in the Eastern Iowa Industrial Center along Interstate 80.

“Construction is expected to commence this summer with the new facility opening in 2024. As part of the economic development agreement, the city will consider a tax increment financing TIF agreement that will provide 60% rebate to the company over 15 years,” Matson says. Fair Oaks Foods has also applied for a $3.4 million sales tax refund on construction materials from the Iowa Economic Development Authority (IEDA). The IEDA board is expected to consider the application Friday.

They sell their products to the food service industry, national grocery stores, and restaurants. Freda says the Davenport facility will let them make a new product. “This is an expansion into bacon — we’re expanding our capabilities into fully cooked strip bacon,” he says. Fair Oaks Foods is a family-owned company founded in 1985 and it is the 11th largest black-owned business in the U.S.