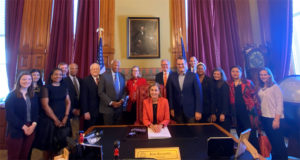 Governor Reynolds at the signing of the George Washington Carver bill. (photo from Governor’s office.)

One shortens the amount of time Iowans can receive unemployment from 26 weeks to 16. It also requires the unemployed to take a lower-paying job more quickly. Reynolds argued that the safety net instituted during the pandemic was leading people to not take jobs, thereby worsening the workforce shortage.

“With the bill that I sign today that caps unemployment benefits at four months down from over six months and ensures that those collecting benefits cant turn down suitable jobs. So we are working with them but it is definitely something that will move us in the right direction.” The changes to unemployment rules go into effect July 1st.

The governor also signed a bill aimed at expanding the number and affordability of childcare slots in the state. It allows child care providers to oversee more toddlers without increasing staff.

“When I convened the Governor’s child care task force last year, one of the things that it discovered was that Iowa’s childcare staffing ratios were some of the most restrictive in the country and so the task force recommended new minimum child-staff ratios and the third bill I’m going to sign today does just that,” Reynolds says. In addition to raising the child-to-staff ratio for two and three-year-olds, now 16 and 17-year-olds can work for providers without supervision. At-home childcare programs will be unaffected

Another bill signed Thursday would allow Iowans receiving government-funded childcare assistance to enter into agreements with providers to pay extra money for services. And she signed a bill that designates February 1st of each year as George Washington Carver Day.