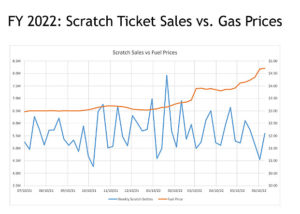 Iowa Lottery CEO, Matt Strawn, says the fiscal year ended Thursday on a very good note, but there are some signs of concern ahead.

“The Iowa Lottery will post its second-highest gross sales total in history, as well as delivered the second-highest amount of proceeds ever returned to the state of Iowa, trailing of course only last year’s record performance that saw lottery revenues rise 22 percent and lottery proceeds rise 25 percent from the previous fiscal year,” Strawn says.

Strawn told the Lottery Board this completes the most successful two years of sales in the 37-year history of the Iowa Lottery — with only two years in which total lottery sales have surpassed 430 million dollars.

“This positive news does come with a note of caution for the future, as the Iowa Lottery is not immune to the strong economic headwinds generated by higher gas prices and inflationary pressures on Iowa households,” he says.

He says things started to slow near the end of the fiscal year. “The month of May was the first month this fiscal year and the first month since March 2020, which was the onset of the pandemic, in which actual lottery sales failed to exceed that five-year monthly sales average,” Strawn says.

Scratch tickets make up two-thirds of the Lottery’s revenue and May scratch ticket sales were down 17.5% compared to the previous May. Strawn says that closely coincides with rising gas prices.
“May of 2022 was the first time this fiscal year that average fuel prices in Iowa exceeded four-dollars per gallon. And I can share with the board that this downward year over year trend and scratch sales has continued into June as gas prices cleared the four-dollar and 50 cents per gallon threshold,” Srawn says.

He showed the Lottery Board a chart comparing gas price increases and the drop in scratch ticket sales.
“This data helps validate what we have been hearing anecdotally, from Iowa retailers regarding reduced store foot traffic as gas prices have increased. You know, essentially fewer folks are coming into the store after they’re filling up. And as you all know, the only way in Iowa can buy a lottery product is by walking into the store.

Strawn says a June survey in Convenience Store News shows that 53% of convenience retailers surveyed expect sales to be lower this summer compared to last summer. Strawn says this is a note of caution that the Iowa Lottery will continue to face a challenging economic environment in the new fiscal year.