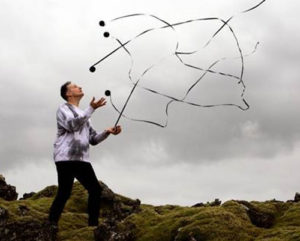 As many as 500 professional jugglers from all over the world will gather in eastern Iowa next week for the 75th annual International Jugglers’ Association Festival.

Event director Afton Benson says the weeklong schedule of performances in Cedar Rapids includes a series of public shows as well as a juggling competition, what’s considered the world championships of stage juggling at the historic Paramount Theatre.

“These are vetted performances. They have to meet a certain criteria. They compete to win awards and prize money. This is how you get gold in individuals from the International Jugglers Association,” Benson says. “Folks have been planning for this for years. We did a couple of them online during the pandemic but we’re really excited for that to be back this year.”

The jugglers will be judged on four basic criteria, including difficulty, creativity, execution and lastly, presentation. “This could be an act that someone could take and tour with a circus company or potentially be on a cruise ship,” Benson says. “That takes into consideration the music, costuming, the choreography, if someone has a story, or they’re telling jokes with their performance, it’s everything outside of strictly just the juggling itself.”

It’s truly an international event, she says, with top-notch performers coming to Iowa to compete from across the U.S, Canada, Mexico, Germany, France and several other nations. Most of them will be featured in the Saturday finale, called The Cascade of Stars.

“And that is our biggest show. It has people from all over the place in it. These are folks — with all of our shows — who perform for a living,” Benson says. “These are acts that you would not normally see anywhere else, and we brought them all together and put them into one show and it caps off our week in Cedar Rapids nicely.”

In addition to being the festival’s director, Benson is a juggler herself. She got hooked when attending a renaissance festival and continues to improve her skills. “If you put in 10 minutes a day working on juggling, you will become exponentially better very, very quickly, and there’s nothing in life that I’ve found that compares to that,” Benson says. “If you’re trying to save up for something or you’re working on fitness, those things take a long time with small results over a long period of time. Juggling, 10 minutes a day every day, you will be better and better and learn more tricks every day you try something.”