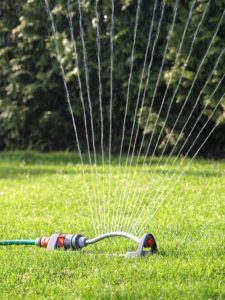 With another hot day ahead and forecast highs mostly in the 90s all week, Sioux City is joining the growing list of Iowa communities that are asking residents and businesses to voluntarily conserve water.

City utilities director Brad Puetz is launching an immediate odd-even irrigation schedule and says lawns should only be watered up to three days a week.

Puetz says the conservation effort will be in effect through September unless conditions change, but for now, it’s voluntary.

“We’re still maintaining levels in the wells that are adequate to provide the raw water supply that we need,” Puetz says, “so to put a timeframe or percentage on it would be difficult. What we are seeing is water demands due to irrigation in the early morning hours are really starting to stress the storage structures.”

Watering should be done at night and during the early morning to avoid the hot afternoon sun when the water will quickly evaporate.

“We recommend that people water between 3 AM and 9 AM,” he says. “We see a lot of people throughout the city watering their yards in the hottest period of the day with little benefit offered to the lawn. It really just puts additional stress on the distribution system and our water storage structures.”

While Storm Lake has mandatory water restrictions, cities that have enacted voluntary restrictions range from Rock Valley to Des Moines.