You are here: Home / News / Restored B-17 open for tours, flights at Sioux City airport 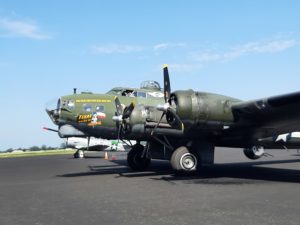 Two restored military aircraft are in Sioux City through this Sunday, July 24, to mark the 80th anniversary of the Sioux Gateway Airport.

Dan Ragan is part of the crew for the B-17 “Flying Fortress.” He flew on the plane as he was stationed in Hawaii during the Korean War.

“Our mission was first generation of AWACS and I was assigned as a radio operator on that aircraft right there,” he says. “…I flew on it back in 1953.”

AWACS stands for Airborne Warning and Control System. The B-17 in Sioux City is one of just three that are actively flying in the U.S. today. People can tour the aircraft, which has been restored with period-specific equipment. Ragan says the bomber didn’t fly over Korea, but had a special task.

“Our mission was we flew about 200 miles away from the (air craft) carriers and we looked with surface radar 200 miles towards the bad guys,” Ragan says. “And we gave the carriers 400 miles heads up: ‘You have incoming.'” 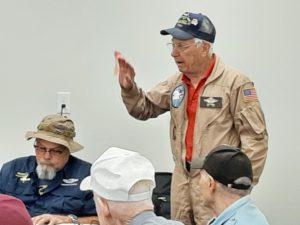 “When I got out of the Navy, I went back to school and finished as (an electrical engineer) and I went to work for Collins Radio Co., the Cadillac of the industry. I spent about eight years as a design engineer in Dallas and got into product management and they transported me to Cedar Rapids, Iowa,” he says, “and I found out real fast my winter wear in Dallas made great summer wear in Cedar Rapids.”

A single engine aircraft used to train thousands of pilots and airmen for combat is also at Sioux City’s airport this week. Cockpit tours and flights on the planes are available from 10 a.m. to 4 p.m. through Sunday. You may buy tickets online.