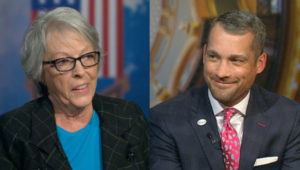 The leaders of two Iowa health care groups say they’re concerned about the pending closure of the state-run Glenwood Resource Center for residents with profound disabilities.

After a federal investigation of how residents were being treated, state officials announced the facility would close in 2024.

Di Findley is the founder of Iowa CareGivers, an advocacy group for health care workers and those who receive care. While Findley understands ending institutional care is a priority, she says transferring Glenwood residents to community or home-based care will be difficult.

Findley says many of the families of Glenwood residents will not be equipped to provide direct care. “I have serious concerns about how people are going to be able to access good care in the home,” Findley says, “(to) keep them safe.”

Brent Willett is president and CEO of the Iowa Health Care Association, which represents nursing homes — the primary destination as al Glenwood Resource Center residents are transferred by the end of 2024.

“The priority is being on placing them in the community, which we absolutely support,” Willett says. “The concern that we have is that the infrastructure is not there and the timeline is aggressive just for these folks.”

“The 30,000 people in nursing homes across the state of Iowa have some of the highest acuity levels, which is their level of illness, than any other state in the country,” Willett says. “…We need to face that reality that folks that are in nursing homes overwhelmingly cannot return home, and so we simply cannot have a long-term care continuum without a robust nursing facility system to support and care for those individuals.”

Willett and Findley made their comments during a recent episode of “Iowa Press” on Iowa PBS.