You are here: Home / News / Forecast calls for hot turning to hotter 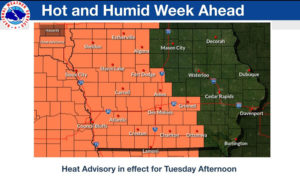 It’s hot today but forecasters say it’ll be even hotter tomorrow afternoon, when some 60 Iowa counties will be under a Heat Advisory.

Meteorologist Alex Krull, at the National Weather Service, says it’ll be uncomfortably steamy, especially across western and central Iowa.  “Tuesday afternoon, we’re looking at actual air temperatures likely in the upper 90s, ranging anywhere between 96 and 99 degrees,” Krull says, “but the humidity, with the higher dew points, will result in the heat index values reaching anywhere between 105 and 107.”

We’re entering a prolonged heat wave which is expected to last all week, into the weekend — and beyond. “It’ll definitely make it dangerous to be outside, whether you’re doing any exercise activity or anything athletic,” Krull says. “Also, this is an important reminder to check in on our vulnerable populations as well, such as the elderly, young children or anyone who may be experiencing any medical issues with cardiovascular or respiratory health.”

The heat advisory runs from 1 to 8 p.m. on Tuesday and more advisories are possible throughout the week and month.
“For the next couple of weeks here, we are going to be in a pattern that’s going to favor multiple days of having above-normal temperatures for this time of year,” Krull says. “Typically in August, Iowa will see temperatures in the upper 80s, but right now, most of our long-term guidance is indicating that we could have several days where the actual air temperatures are reaching the low to mid 90s.”

The heat wave may last well into the Iowa State Fair, which runs August 11th to the 21st. The Climate Prediction Center’s August weather forecast for Iowa indicates the state could be in for above-normal temperatures and below-normal rainfall.