You are here: Home / News / DOT now hiring for hundreds of seasonal jobs 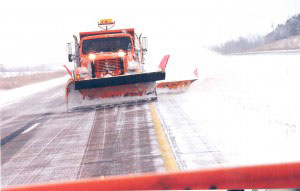 Forecasters say high temperatures should be back in the 80s and 90s for the rest of week, but soon enough, we’ll have to start thinking about winter coats, shovels and snowmelt.

Craig Bargfrede, winter operations manager for the Iowa DOT, says he’s thinking ahead, too, and is already starting to fill hundreds of seasonal winter positions. “This coming year, we have been approved for 633 positions statewide,” Bargfrede says. “We’re just in the early stages about putting out the advertising for these positions and starting the process of bringing those folks on board.”

Those seasonal workers will be working in a variety of capacities. “These positions will be augmenting our full-time staff,” Bargfrede says. “So we’re looking for folks with CDLs that can operate our snow plow trucks and other equipment in the garages. They’d be looking at everything from plowing snow to filling trucks, making brine and all the other tasks associated with winter operations.”

To say that state highway crews should have plenty of road salt for the season ahead would be an understatement.
“We have more salt actually on the ground than we ever have in the history of the Iowa DOT,” he says. “Last winter, we didn’t use as much material as we had contracted, so we were forced to take more salt and store it than what we typically do, but that’s a good thing.”

Find DOT jobs in your area by visiting Iowa-DOT.gov and clicking on the “Careers” tab. The agency maintains 101 garages across the state.