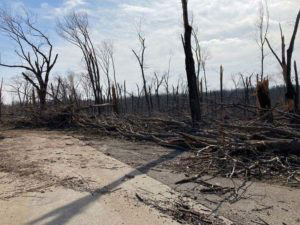 Damaged trees at Red Haw after the tornado. (DNR photo)

It’s been a little over six months since a deadly tornado tore across southern Iowa’s Lucas County, destroying much of the infrastructure and foliage at Red Haw State Park near Chariton.

Sherry Arntzen, chief of the Iowa DNR’s Parks, Forests and Preserves Bureau, says the park has reopened for day use but repairs are still underway as the park’s campground took a direct hit from the powerful twister. “The campground is still shut down. It’s finally been cleaned up in terms of trees,” Arntzen says. “A large number of trees had to be taken down as a result of that. The campground is still closed and probably will be closed sometime next year as well as we still have to get in there and repair all the damage.”

One camper was killed in the March 5th tornado and storm damage throughout the park was significant. “We have just been concentrating our efforts on getting that campground cleaned up,” Arntzen says, “to the point where we could begin looking at how we’re going to do all of the repairs then, to the pedestals, the roadways and all of that.”

In addition to the campground, the park lost all five lake docks, three shelters and a storage building. Arntzen says the DNR is grateful so many people have turned out to help get the park back into shape.

“We had a great volunteer effort that turned out shortly after the tornado,” Arntzen says. “They came and helped pick up a lot of the debris that was all over the park.” The National Weather Service says the EF-3 tornado that hit the park was on the ground more than 16 miles, with peak winds of 138 miles an hour. Another tornado that same day struck Madison County near Winterset, killing six people and damaging or destroying more than 50 houses.