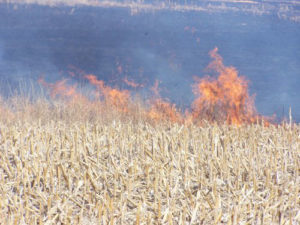 Open burning is now banned in two northwest Iowa counties and one in the southwest, as Plymouth County was added to the list at noon today.

Le Mars Fire Rescue Chief Dave Schipper made the request to the State Fire Marshal’s Office as they’ve only had a few sprinkles in the past several days and drought conditions persist. “With harvest coming up, we know we’re probably going to have some field fires with combines and that sort of thing going on,” Schipper says. “We want to try to focus on those that are accidental and things that can happen like that. We don’t want any intentional fires being lit this fall and control burns that get out of control.”

This is the second burn ban issued in Plymouth County this year. “We did this in the spring not too long ago just to try to help us out with the number of fires during the daytime especially when a lot of departments are shorter on staff,” Schipper says. “Talking with all the fire chiefs, they were all in agreement that we try to get a ban in place.”

Schipper says some types of burning are still allowed, even under an open burning ban. “It pretty much means no open burning outdoors, but you can still have your fire pits in your backyard if they’ve got a screen on them,” he says. “You can still barbecue. If you’re in the country, you can still burn trash in a barrel if it has a screen lid over the top.”

Farmers are urged to frequently clean the dust off of their hot equipment, to always have a fire extinguisher handy, and if possible, have a disc nearby that can be used if corn crops catch fire. Sioux County had its burn ban enacted last week and it’s still in place. There were open burning bans issued recently for 6 southern Iowa counties, but 5 have been lifted. Of the 6, only Fremont County’s open burning ban remains in place.