You are here: Home / Sports / Iowa’s Clark honored by B1G 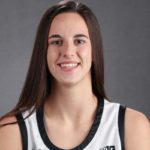 Iowa All American Caitlin Clark has been named Big Ten Player of the Week.

This marks Clark’s 15th weekly award from the conference, which is fourth-most in conference history. She has garnered weekly honors three times this season which is a conference best.

Clark led the Hawkeyes to a pair of wins over Northwestern and Penn State. Against the Wildcats, Clark became the second all-time scorer in school history. The junior registered 20 points, a season-high 14 assists, nine rebounds. It was her 32nd double-double of her career.

Against the Lady Lions, Clark notched 27 points, 10 assists, and seven boards to lead Iowa to its 12th victory of the season by 10 or more points. She also hit another historic milestone becoming the 13th player in Big Ten women’s basketball history to dish out 600 assists in a career