You are here: Home / News / Officials discover $2 million worth of pot in I-80 traffic stop 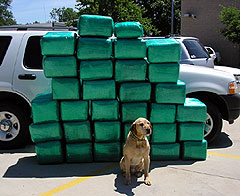 A routine traffic stop along Interstate-80 in central Iowa has uncovered $2 million worth of marijuana.

On Tuesday, Dallas County Sheriff’s Deputies pulled over a pick-up with Colorado plates for a routine traffic violation. The driver’s actions, however, prompted deputies to bring in a drug-sniffing dog. The dog detected drugs.

Deputies found nearly 700 pounds of marijuana in the vehicle. Authorities say the stash was worth about $2 million on the street.

Michael Suitt of Centennial, Colorado — the pick-up’s driver — was arrested and faces drug charges. He’s being held in the Dallas County Jail on a $42,000 bond.