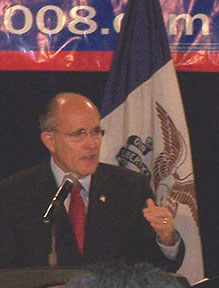 Republican presidential candidate Rudy Giuliani says Republicans must reclaim the mantle of fiscal conservatism and that means not only cutting the size of government but making all the Bush-era tax cuts permanent, a move which is opposed by most Democrats.

"If you elect a Democratic president, you are going to have a $3 trillion tax increase. Now, you think I’m making that up?" Giuliani says. "If you listened to the Democratic debates…they were falling all over each other to increase your taxes." Giuliani was in Des Moines today to deliver a speech in which he laid out his ideas for "squeezing down" the federal government.

"To restore fiscal discipline to Washington and to end wasteful government spending in Washington," Giuliani said. "…It’s one of the major things that I think has to be done." According to Giuliani, 42 percent of federal workers will retire over the next decade and, if he’s elected president, Giuliani would propose that half those jobs not be refilled.

Giuliani told the crowd that paring budgets and extending tax cuts is part of the "pro-growth" agenda he pursued while he was mayor of New York City. "I’m running for president ’cause I know how to do this. I know how to do it because I’ve done it before. I am the strongest fiscal conservative in this race for president. You can compare me to any Republican, any Democrat," Giuliani says. "…I have the strongest record in a place where it was really, really hard to develop that kind of record."

Giuliani’s only public appearance in Iowa was his mid-day speech, but he told the crowd he would be back often. "I need your support in Iowa. I’m going to come here. I’m going to work for it. We’re going to earn it because the only thing you ever get in life you earn and Iowans make you very much aware of that," Giuliani said.