You are here: Home / Politics / Govt / Handful of presidential hopefuls campaigning in Iowa

Today’s a holiday to commemorate the actions of those who founded our country, but a handfull of the people who’re here in Iowa today want to become a future U.S. president.

Today’s 4th of July parade in Clear Lake will feature two candidates — Romney and Democrat Hillary Clinton, who will walk the route with her husband, the former president. 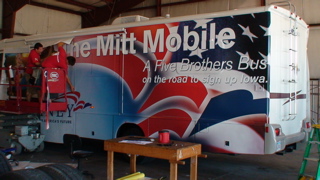 Romney and his crew intend to drive an RV they’ve dubbed the "Mitt Mobile."

"I have sons who are visiting the 99 counties of Iowa this summer. My wife and I will continue our extensive travel plans for Iowa," Romney says. "…I get to meet a lot of people and then ask if they’ll come to Ames and support me in the Straw Poll."

Two of Romney’s chief rivals plans to skip the Iowa Republican Party’s Straw Poll on August 11th, but Romney is focused on that contest as a warm-up for the Caucuses.

"I believe in a process which is not based on ads but is, instead, based on people getting to know who the candidate is and that’s the nice thing about the Caucus process," Romney says. "Most Caucus voters will have shaken…most candidate’s hands. That’s a good thing. You learn something about the heart of the person as opposed to just how good their advertising agency is."

The Clintons appeared yesterday at rallies in Iowa City and Davenport, with Bill Clinton giving brief testimonials on his wife’s behalf.

"When I first met Hillary I told her that of all the people I’d met — and this was 35 years ago — in our generation, she was the best. She had the best combination of mind and heart," Clinton said in Iowa City. "Thirty-five years later, I am more convinced of it."

The Clintons sought to highlight the economic record of Bill Clinton’s presidency.

"You will never have a chance to vote for someone who will leave more people better off when she quits than when she started, who will make you more proud and who will restore our country’s leadership for peace and freedom and prosperity," the former president said.

Hillary Clinton told the crowd in Iowa City is would take years to "clean up" the mess President Bush will leave behind, particularly when it comes to repairing diplomatic ties around the globe.

"I think we have to do everything possible to send a message across the world that the United States will listen and work with those willing to find common ground with us," Senator Clinton said.