You are here: Home / Agriculture / Borlaug set to receive the Congressional Gold Medal 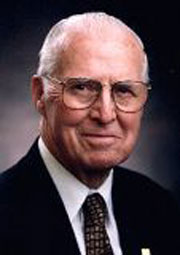 The Iowan known as the father of the "green revolution" is getting the gold. Next week, acclaimed agricultural scientist Norman Borlaug will be presented with the Congressional Gold Medal by President Bush in a formal Washington D.C. ceremony.

Iowa Senator Chuck Grassley says it’s a tremendous honor. Grassley says the medal is Congress’ highest and most distinguished civilian award and he calls Borlaug "a humanitarian hero. He’s the person who saved the lives of hundreds of millions of people through his work to fight world hunger and achieve an adequate food supply for all of mankind."

The 93-year-old Borlaug is a Cresco native and is still actively involved in plant genetics and other agricultural research. Given the millions of people globally Borlaug’s groundbreaking crop research rescued from starvation, Grassley says no one is more deserving of our nation’s top honor. The gold medal itself is designed and created by the U.S. Mint.

Grassley says each medal is unique and represents the individual. The first one was awarded in 1776 to George Washington. "Next Tuesday then, on July the 17th, we will gather in the rotunda of the U.S. Capitol to watch this extraordinary honor be presented to Dr. Borlaug." Grassley says Borlaug has a long humanitarian history and serves as a sterling example of how one person’s hard work and dedication can make a significant difference.

In 1970, Borlaug received the Nobel Peace Prize. In 1986, Borlaug founded what’s now called the World Food Prize to recognize life-saving achievements that increase the quality, quantity and availability of food in the world. Some 250 Congressional Gold Medals have been given in our nation’s history. At least one other Iowan has received one — actor and Winterset native John Wayne.