You are here: Home / Politics / Govt / Romney and the ‘five second rule’ 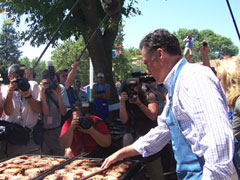 Five Republican presidential candidates are swarming around the Iowa State Fairgrounds today. Former Massachusetts Governor Mitt Romney and his wife flipped chops on the grill at the Pork Producers stand.

“I love hamburgers and hot dogs,” Romney said in answer to a question about his tastes in grilled food. “Whoa! There goes one.”

Romney, who was flipping cooked chops into a container, dropped one near his feet. Some of the men who’d been manning the grill since early this morning shouted, “Leave it. Leave it. Leave it.”  Romney and a few others started talking about the “five second rule.” Romney’s wife suggested the chop could be given to “the dogs.”

Romney bent down, picked up the chop and tossed it back on the grill. “Don’t throw ’em away,” Romney said, chuckling, as he rescued the chop.

“I hope you don’t do that at home,” a fairgoer shouted from the sidewalk.

A few moments later a reporter asked Romney if it was “smart” for him to be “flipping” pork chops since his rivals have accused him of flip-flopping on issues.

“I’d like to do as well as I can do,” Romney said.  “I think everybody wants to win. I want to win, too, but a lot of folks are working hard and we’ll see who comes out (on top)…I only like to think about success, so I’m only going to plan for success and we’ll see what happens from there.”

“We’re thinking about going to the finish line and if we aren’t first, we’re going to be so close that there’ll be folks looking around on their shoulder to see just how close we are on their heels,” Huckabee said.

Huckabee recently lost more than a hundred pounds and amended his advice that fairgoers should stay away from the wide variety of deep-fat-fried fair food.

“Probably not a politically correct thing to say at the Iowa State Fair in the Midway, so all I would say is: ‘Enjoy in moderation,'” Huckabee joked.

Huckabee told reporters the only fair food he might consume would be protein — like a pork chop. It wasn’t the one Romney dropped and tossed back on the grill. One of the Pork Producers manning the grill plucked it off and threw that chop away.

Huckabee, Romney and three other GOP candidates spoke at an afternoon forum on the fairgrounds that was focused on health care and financial security issues.