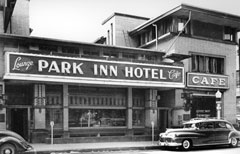 Some residents of Mason City are hoping to save one of the few hotels designed by famed architect Frank Lloyd Wright.

Ann MacGregor is executive director of the non-profit group " Wright on the Park ." She says the Park Inn Hotel in Mason City closed in 1972.

MacGregor says Wright designed just six hotels in his professional career and the structure in Mason City is the only one in the world still standing. The others have been demolished. MacGregor’s organization is hoping to raise nearly 20 million dollars to repair the hotel and the former City National Bank Building, which Wright also designed. The goal is to reopen the 27-room hotel in three years.

"This is going to be an historic boutique hotel," MacGregor says, "there will be areas for conference rooms, banquet facilities, a restaurant…it’ll be a full scale operating hotel." The two buildings feature Wright’s Prairie School design, which greatly influenced architecture in Europe.

MacGregor says the buildings were opened in September of 1910 and they hope to have them reopened by the centennial anniversary in September of 2010. Funding for the rehabilitation project involves mostly donations, but the "Wright on the Park" group could also benefit from a Vision Iowa Community Attraction and Tourism grant. The Mason City Chamber of Commerce is applying for a CAT grant on behalf of a number of projects.