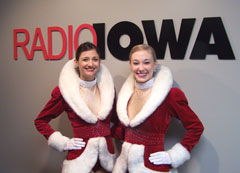 A world famous dance troupe will be bringing it’s show to Iowa for the first time this December.

The Radio City Christmas Spectacular, featuring the Rockettes, will run December 6th through the 30th at the Civic Center in downtown Des Moines. Two of the Rockettes are in Iowa this week to promote ticket sales.

Stacey Sund grew up in New York and says she always dreamed of becoming a Rockette after seeing them perform in the Macy’s Thanksgiving Parade. Sund says the Civic Center shows will be memorable.  (photo L-R: Stacey Sund, Miki Berg)

The Radio City Rockettes perform more than 300 leg kicks in every show. Rockette Miki Berg is from Elk River, Minnesota and says it’s a thrill to be part of such a popular, long-running show. "It has been such a long-time tradition," Berg says, "it’s been going since 1925. Everything we do is so precise and classy, and I think the audience just loves to see that." Tickets cost $35.50 or $64.50.