You are here: Home / Military / Search on for DNA to help identify missing soldiers 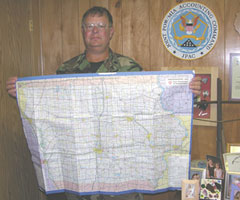 Brown says they’re tiring to locate family members to get a reference sample to either identify the missing soldiers, or determine they are not related to the Iowans. Brown was in Iowa for POW/MIA Day Friday, and says the effort was successful last year in finding families.

Brown says of the 27 requests last year, 26 family members came forward and gave samples of their DNA. Brown says once they get the names, they can start trying to make matches with the names of the missing soldiers. He says they pass on the names to the Service Casualty Office, which then sends out kits to get DNA samples, and then they can get the samples and start trying to match them up.

Brown is asking families who have a missing soldier to contact the military and see if their DNA sample is needed. Brown says they can go to the Service Casualty Office of any branch of the military, or go on-line and search for JPAC to find the website for more information. Brown says they are looking to identify soldiers from a couple of different wars.

He says the vast majority are from the Korean War, and there are two from Southeast Asia. Brown, a native of Brunsville, Iowa, says part of his job is to call families and tell them about their relatives. Brown says it’s very rewarding when the identity of a soldier is determined and he can pass the information to relatives.