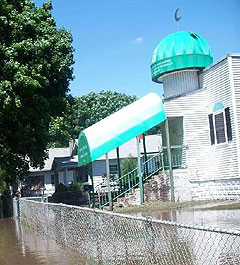 The oldest standing mosque in the United States is one of the many structures in Cedar Rapids damaged by flooding. Imam Taha Tawil is the executive director for the Mother Mosque of America. He was allowed access to the building Tuesday for the first time since it was flooded last week.

Tawil says water didn’t reach the main floor, but destroyed the basement which houses the kitchen, lecture hall and many historic documents and artifacts. Tawil says the basement contained 10 to 12 feet of water. He gathered several pictures that hung in the lecture hall but ended up scattered on the basement floor.

One photo was of the individuals who built the Mother Mosque, standing outside the building on the day of it’s dedication in February 1934. “You can tell that picture is totally destroyed,” Tawil said. Arabs, both of Muslim and Christian faith, first came to Iowa in the early 1900’s. Tawil says the immigrants would travel from all over the state to worship at the mosque in Cedar Rapids.

“There is a sadness, a hurt in my heart, because this mosque is like part of my family,” Tawil said. The mosque is one of many museums and historic buildings in Cedar Rapids hit by the floodwaters. “When I look around, I see the Czech Museum, the African American Museum, the Mother Mosque,” Tawil said, “and I said ‘flood doesn’t know color, flood doesn’t know race or religion or tradition. Flood is like death…it doesn’t distinguish.'”

Tawil says he believes the devastation left by the flood will eventually make Cedar Rapids a better place to live. “I’m looking at the future and seeing more cooperation and more openness between the people of (different) traditions, cultures and religions. This (flood) brought something good for us…and that is to unite us together, because we are first and foremost humans,” Tawil said.

The Mother Mosque was the main place of worship for Muslim-Americans in Cedar Rapids until 1971, when a new Islamic Center opened in town. The old building was later purchased by the Islamic Council of Iowa and renovated. It reopened in 1992. Tawil says he won’t know if the Mother Mosque can be saved until an engineer checks out the foundation. He says local volunteers and a youth group from a mosque in Minneapolis have offered their help to clean-up the Mother Mosque.