Four projects across the state will share nearly three million dollars in grants from the Vision Iowa program. The Vision Iowa Board approved the Community Attraction and Tourism (CATS) grants Wednesday. 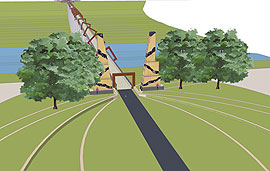 Anderson says the "iconic piece" of the trail will be a half-mile long, 130 foot tall bridge spanning the Des Moines River in Boone County.

The bike and walking trail, which will follow a railroad line that’s no longer in use, could open in 2010.

The community of Postville in northeast Iowa has struggled to bounce back from an immigration raid on the town’s largest employer, Agriprocessors, Inc. Anderson says an 850-thousand dollar grant will help improve Postville’s recreation center.

The two-story addition will include an indoor swimming pool. "It’s a very nice project for a town that could use a shot in the arm," Anderson said. A project in Clinton was awarded 325-thousand dollars. The money will be used to renovate the new site for the Felix Adler Children’s Discovery Center. The center’s old location was demolished to make room for the expansion of Highway 30.

"What’s exciting is that it’s in downtown Clinton, near the library and YWCA, so there’s a lot of supporting services that can work together and make a really nice downtown destination in Clinton," Anderson said. The final CAT grant is worth 45-thousand dollars and will help build a new park shelter in the small southeast Iowa town of Birmingham.

"It’s a smaller project, but it’s the first project we’ve done in Van Buren County, so we’re pleased with that," Anderson said. "We’ve been looking forward to doing something in that county." All of the grants are contingent on the projects reaching fundraising goals in the 90 to 120 days.