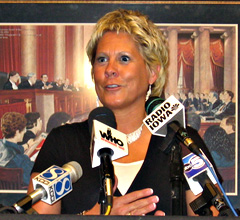 Miller claims the company deceived Iowans they reached by phone, telling them that all of their dollars donated would go directly to the charity. "But in some instances that doesn’t happen, particularly with outside fundraisers," Miller said. "They typically keep 80 or 90% of the dollars the person gives."

It’s not illegal for a professional fundraising company to keep 90% of the donations made and send the remaining 10% to the charitable organization. Miller says the company is also not required to disclose that information to the people they call. "But, when people set up these shops and engage in deception, we invariably do find out about it," Miller said.

The lawsuit asks for civil penalties of up to $40,000 for each violation of the Consumer Fraud Act. Miller says his office is still calculating the number of violations. The lawsuit alleges calls placed by Public Safety Communications in a recent year collected about $1.5-million.

Sheri McMichael, Executive Director of Variety – The Children’s Charity of Iowa, says professional fundraising companies like the one named in the lawsuit give her organization a bad rap.

"I would say it makes me very angry," McMichael said. "We all know the dollars are limited and where those charitable dollars are going to go. So, when they’re fraudulent and they’re going to organizations that are misrepresenting themselves, that’s hurting Iowans. That’s hurting children right here in Iowa and it’s giving those good non-profit organizations a bad reputation."

Iowa is also one of many states to join a lawsuit against Community Support Incorporated, or CSI, a professional fundraising company based in Milwaukee, Wisconsin.

Iowa’s suit alleged that CSI called Iowans and misrepresented who was calling, where the charity was located, the charity’s connection to Iowa and how much of the donation was going to the charitable cause. A court settlement orders CSI to pay the group of states $200,000.