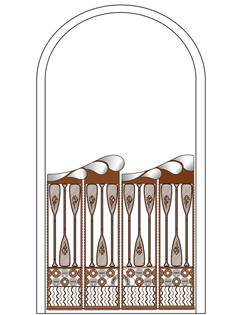 The Iowa State Fair opens in Des Moines this week and fairgoers that visit the D.N.R. building will notice a new gate. Brian Soenen, with the Iowa Department of Natural Resources, says they’ll be surprised to learn how it was made.

"The new gates are made from garbage pulled rivers by volunteers," Soenen said. "Visually, they’re just beautiful pieces of artwork."

Every year, Soenen helps organize a week-long Project AWARE trip. Hundreds of volunteers spend the week plucking tons of trash from Iowa rivers. That trash is often transformed into a piece of art, like the gate.

The metals found in the gate made their way into the Winnebago, Shell Rock and Cedar Rivers. Soenen says the material was part of 47 tons of garbage pulled from the rivers last August. Canoe paddles, often used to remove the trash, are also used in the gate’s design. It’s the first of five new gates to be built around the D.N.R. building on the fairgrounds over the next five years.

Soenen says fairgoers can help create next year’s gate over the next week. On select days, fairgoers will be allowed to melt, hammer and re-shape garbage into art that will be used for next year’s gate. The trash being used was pulled from the Cedar River in the Cedar Rapids area this past June.