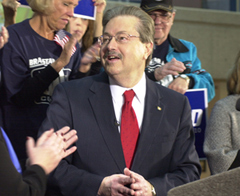 Former Governor Terry Branstad is proposing a series of state budget reforms that he tried to enact during the end of his 16-year tenure as governor. “We can get this done,” Branstad says. “And I’m hopeful that Democrats will endorse it as well.”

Branstad, a Republican who’s seeking a fifth term as governor, says it’s time for the state to have budget plans that stretch over two years, not just one, and he says the governor and legislators should agree on a five-year financial plan for state government.

“I have some I think really good ideas on how we can get the state back on track,” Branstad says. “It’s going to take some time, but we need to, number one, end the bad budgeting practices of using one-time money on on-going expenses like they did last year by using the (federal economic) stimulus money for on-going expenses.”

Branstad made some of these proposals before when he was governor — like calling longer-term budgeting — but the Republican-led legislature did not implement them. Branstad says he’s convinced Republican legislators will embrace the ideas now. “I’ve already talked to them. This time it’s different. I think that they’ve learned a lesson,” Branstad says, with a laugh.

Branstad accuses Culver, the incumbent Democrat who plans to seek reelection this year, of “playing shell games with taxpayers dollars” and engaging in “erratic” budgeting that has left schools and state agencies struggling to cope. Branstad spoke by phone with Radio Iowa early this afternoon (Monday) after outlining his budget ideas for students at Southeast Webster-Grand High School in Burnside.