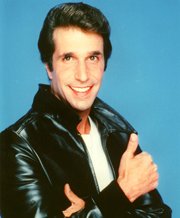 Henry Winkler as “The Fonz”

The actor best known for his character “The Fonz” on the top-rated TV series “Happy Days” during the 1970s and 80s is in Iowa this weekend in hopes of inspiring others to chase their dreams.

Henry Winkler will turn 65 this year and says he grew up being nothing like the iconic thumbs-up Arthur Fonzarelli, King of Cool — as he had dyslexia. Winkler says: “Math was hard. English was hard. History was hard. I was great in lunch. School was unbelievably difficult for me.”

Winkler persevered and eventually found huge fame through acting. Since “Happy Days” left the air in 1984, he’s acted steadily, as well as produced and directed, while doing a lot of public speaking. “I was told I would never achieve,” Winkler says, “and if I can do it, anybody can do it.”

Based on his early struggles, Winkler has written a popular series of children’s books that have sold millions. The 17th and final book in the series comes out next month, though Winkler says he intends to create another series of books for kids.

A recent television success for Winkler was on the Fox series “Arrested Development.” He says his character, a twisted lawyer named Barry Zuckerkorn, will be featured in the upcoming feature-length movie, based on the series. One of the leather jackets Winkler wore as The Fonz on “Happy Days” is now in the Smithsonian Institution where it’s on display as a symbol of Americana and television history.

“My parents escaped Nazi Germany and they came with me when I presented the jacket,” Winkler says. “My wife and I were there in Washington at the Smithsonian and it was one of the greatest honors of my life, outside of my children.” Winkler and his wife of 32 years, Stacey, co-founded the Children’s Action Network in 1990, which works to find homes for children in foster care and provides free immunizations.

In his role as a public speaker, Winkler is appearing at World of Wheels events across the U.S., including this weekend’s show at Hy-Vee Hall in Des Moines. “I get to meet my fans and I have my children’s books with me, ‘Hank Zipzer, The World’s Greatest Underachiever,’ and people come to say hello and then they come and see these incredible cars.”

This is Winkler’s second visit to Iowa. His first trip here was to speak before — true story — a convention of funeral home directors. Referring to this weekend’s engagement, he says, “This is a much more joyful event.”

For details, visit “www.iowaeventscenter.com“. While Winkler will turn 65 in October, he has no plans to retire, saying he intends to “continue to work as an actor until my walker no longer helps me.”