Republican Bob Vander Plaats today revealed the name of the new group he will lead in an effort to unseat three Iowa Supreme Court justices.

Vander Plaats held a news conference on a sidewalk outside the Iowa Judicial Building to announce his new group will be called “Iowa for Freedom” and the group’s website is already online. “We right now have the resources to run a very effective, grassroots campaign,” Vander Plaats said.

But Vander Plaats declined to reveal how it’s funded or the names of other groups which may be involved. He’s not saying whether he’ll be paid to be the group’s chairman either. “That’s a good question,” Vander Plaats told a reporter when asked if his position with the group would be a paid position.  “I should ask.” 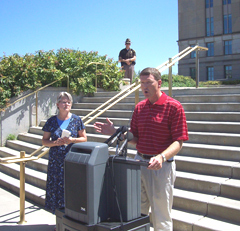 Vander Plaats is asking Iowans to vote no on the retention election for three Iowa Supreme Court justices who joined the unanimous 2009 opinion which paved the way for gay marriage in Iowa.

Vander Plaats, though, is seeking the support of Iowans concerned about other issues, like property rights and immigration, to join what he calls an effort to reign-in an activist court.

“We have the funds to run a very good…dynamic grassroots campaign that can provide office, that can provide staff and that can engage a lot of volunteers throughout the state which I think we need to do in order to win this battle,” Vander Plaats said.  “Everything else, I think, we’re going to have to see what comes in, but I think a lot of people are going to take this serious.”

This isn’t an effort that’s “done every day,” according to Vander Plaats, and Vander Plaats predicted if it’s successful, similar efforts could be launched to reign in judges in other states.

“The simplicity is the court stepped out of bounds. Three judges are up for (retention). You don’t have to choose which one you vote no on.  Vote no on all three of them,” Vander Plaats said.  “And if you’re really concerned about your freedom — whether it’s your Second Amendment or your First Amendment or your Tenth Amendment or the way you educate your kids or private property or anything else — you want to get involved in this effort.”

While Vander Plaats said the group already has “resources” — which means money — he isn’t yet revealing whether it’s a political action committee or some other type of organization.

This was the second time in less than a week that Vander Plaats held a news conference on the sidewalk outside the Judicial Building.  Last Friday Vander Plaats went to that spot to announce he would not run as an independent candidate for governor and would lead an effort to unseat the supreme court justices involved in the gay marriage ruling.

“One Iowa” is a group which supports the gay marriage ruling.  Carolyn Jenison, One Iowa’s executive director, issued a statement after the news conference.  “Bob Vander Plaats is a failed politician who has nothing better to do than play politics with the lives of Iowans. He aims to hurt Iowa families, divide our communities, and demean our judicial tradition of equality for all,” Jenison said. “I believe Iowans will reject this campaign this November, just as GOP primary voters rejected Bob Vander Plaats on June 3.”