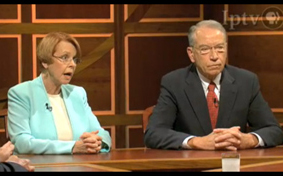 The two taped a half-hour-long joint appearance on IPTV’s “Iowa Press” and quarreled over a variety of topics, including health care.  Conlin accused Grassley of flip-flopping on a key component of the health care reform plan.

“Senator Grassley now says mandatory health insurance is unconstitutional,” Conlin said. “(Grassley) introduced a bill providing for mandatory coverage in 1993 and as recently as 2008 he supported it, so I can’t understand why suddenly it’s gotten unconstitutional.”

Grassley responded:  “My name was on a bill in 1993, but there’s a lot about the constitution you learn over the period of the next 15 years and I’m not a lawyer, but I do read the constitution.  I do read some of the laws and I came to the conclusion that it’s unconstitutional, just like the attorney generals of about 22 states.”

After the program, Grassley told reporters it was in April or May of last year that he changed his mind about requiring Americans to buy health insurance just like drivers are required to buy insurance on their vehicles. “And then you have people raise the question, ‘Well, where is it in the constitution that you have to buy anything?'” Grassley said.

Conlin also spoke with reporters after the show and she suggested Grassley’s change of heart on the issue was a symptom of what’s wrong in Washington. “What has happened out there is that anything that Democrats propose Republican oppose, no matter what it is — even if it’s their own ideas,” Conlin said. “That’s happened over and over and over again and that’s what makes people crazy.”

Grassley is seeking a sixth term in the U.S. Senate this November. Conlin has never held elected office, but President Carter appointed her as one of Iowa’s U.S. Attorneys and she ran for governor in 1982.