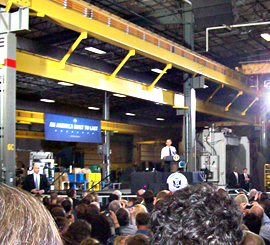 “I hear folks running around calling this class warfare. This is not class warfare. Let me tell you something: asking a billionaire to pay at least as much as a secretary, that’s just common sense,” Obama said. “That’s common sense.”

During a speech in Cedar Rapids earlier today, Obama renewed his call for raising the tax rate to at least 30 percent for Americans who make a million dollars or more.

“A quarter of all millionaires pay less taxes than millions of middle class households. Warren Buffett pays a lower tax rate than his secretary. Does that make any sense to you?” Obama asked. “…Do we want to keep these tax cuts for people like me who don’t need ’em?”

Obama said raising taxes on the wealthy is the “choice” he’s making to deal with the deficit and budget demands in areas like the military, because you can’t just “cut your way out” of such a long-term problem.

“Look, nobody likes paying taxes. I’d understand that. So, if we didn’t need it, if the country was in a surplus like it was back in 2000, I’d understand us saying, ‘Well, let’s try to, you know, let millionaires keep every last dime,'” Obama said. “I get that, but that’s not the situation we’re in.”

AUDIO of introduction of president and Obama’s speech at Conveyor Manufacturing and Engineering.

Obama’s visit to Cedar Rapids came less than a month after Iowa Republicans held the nation’s first contest in the presidential election season, prompting Obama to reminisce about his own 2008 Iowa Caucus campaign.

Read more about his “nostalgic” comments.

Obama told the crowd gathered at a Cedar Rapids manufacturing plant that the “blue print” he laid out last night in his “State of the Union” speech is focused on rebuilding the middle class.

“Values that Iowa knows something about: hard work, responsibility and the same set of rules for everybody, from Main Street to Wall Street,” Obama said, to cheers from the crowd.

It was a mostly partisan crowd, but the Democratic president invited Republican Governor Terry Branstad was invited, too. Afterwards Branstad chatted with reporters about the event.

“I’m not going to be real critical because as governor after I do the ‘State of the State’ (message), I go around the state of Iowa and meet people, too…so I certainly respect that he has a right to get out and go around the country,” Branstad said. “I think the biggest concern is he just happened to strategically choose places that are looked at as battleground states in this presidential election.”

Iowa has been a so-called “swing” state past elections, too, drawing attention from the nominees of both parties in the battle to win key states en route to acquiring enough votes in the Electoral College to win the presidency.