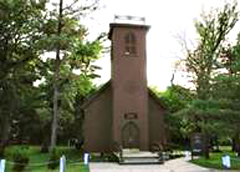 The Little Brown Church in the Vale near Nashua will celebrate the 60th annual Marriage Reunion today and tomorrow.

Reverend Jim Mann is the pastor of the church. He said another large crowd is expected to attend.

He expects to have around 300 people show up today.

“One of the things we’re really trying to focus on is to celebrate marriage. It’s to the point anymore where it seems like we focus so much on the 50% of marriages that fail, and we forget to focus on the 50% that do make it,” Mann explains.

“So this is a chance to bring some honor and glory onto them and let it be known that there’s some real rewards for marriages that last a long time.” Reverend Mann presided at wedding number 73,573 Friday at the church named after a popular hymn.

Mann says they believe the church has had an influence on the way weddings are celebrated, and says things really took off in 1912 when the song became popular. The church first opened its doors back in 1864. Mann said the weekend will include a talent show tonight at 7 p.m.

“And that’s open to anyone who would like and the real rule of it is that you perform the song the Church of the Wildwood in any way that you prefer,” Mann says. This will be the fifth year for the contest and he says people have played the song on guitars,pianos, kazoos and two people even sang it in Japanese, which Mann says has made the evening “very interesting.”

Sunday morning’s worship service at 10:30 will include the opportunity for couples to renew their marriage vows. “During the worship service, all the couples that want stand and renew their vows. And it’s quite an emotional time. Of course the church is ‘The Little Brown Church in the Vale’ so we don’t have room for everyone in the church building. So we invite the couples that have been married 50 years or to be in the sanctuary and there is room outside in a tent for everyone else,” according to Mann.

There will be a program at noon Sunday featuring Gary Froiland (FROY-land) with a musical program. There will also be a producer on hand filming a documentary about the reunion of those who have been married in the church. It is hoped that the documentary by Hanson will be completed by Christmas.