You are here: Home / News / Iowa’s Gray the youngest delegate in Charlotte 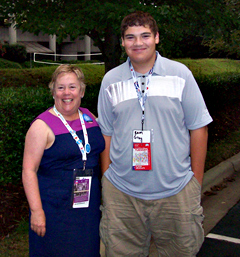 The youngest delegate at the Democratic National Convention in Charlotte is from Iowa. Seventeen-year-old Sam Gray of Marion becomes an eligible voter on October 19 when he turns 18.

“I just watched it a lot on TV when I was younger and listened to my family speak about it, but I wanted to be involved,” Gray told Radio Iowa. “I guess I went from watching it on TV to trying to participate in what I saw, so when I knew that I would be old enough to participate in the Caucuses and what not I chose to do so.”

Gray’s first memory of politics is the 2000 election — when he was six years old.

“When it was Al Gore and George W. Bush, my parents were talking about it and I remember sitting around with them and I didn’t really know anything about it at that time, but I remember watching it on TV and I guess, from there, my interest just kept growing,” Gray said.

Gray would entertain the idea of serving on a city council or school board some day, but he has no plans to become “a politician.”

“It’s not something that I necessarily want to make like as a career,” he said.

Gray is missing school this week — but attending a national political convention is the kind of learning experience he’ll be able to share with his classmates in government class.

“My teachers are pretty supportive of it,” Gray said.

Gray, a senior at Marion High School, will be attending Young Democrats’ meetings in Charlotte this week and he’ll be sitting on the convention floor Wednesday night as a delegate from Iowa, to cast his vote for Barack Obama.

“I think it’s really cool that I have this opportunity at a young age,” Gray said.

Gray had to give a speech at the first district convention this past spring to win a spot as a delegate to the Democratic National Convention.