You are here: Home / Business / Governors discuss marketing the Midwest to businesses (AUDIO) 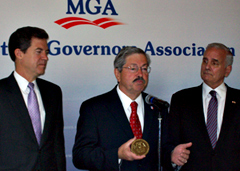 Governors, Brownback of Kansas, Branstad of Iowa and Dayton of Minnesota. (L-R)

Three current governors and a few former governors from Midwestern states gathered today in Des Moines to discuss strategies for promoting the region to businesses.

Kansas Governor Sam Brownback said he and the other governors need to review business deals they’ve lost to other regions of the country, and then “fix” whatever the problem may be.

“This region is really positioned well to grow substantially,” Brownback, a Republican, told reporters late this morning. “…But we’ve got to be competitive to be able to do that.”

Minnesota Governor Mark Dayton said Midwesterners should look at what other regions of the country have done to be successful — and then go beyond that.

“Coming from a retail family, competition is good for retailers. It’s good for politicians,” Dayton said, “and it’s good for the states.”

In 1902 Dayton’s great-grandfather opened a dry goods store. The Dayton Hudson Corporation opened its first Target store in 1962 and the company is now the nation’s fourth-largest retailer. Minnesota’s governor, who is a Democrat, acknowledged it won’t be easy to come up with a marketing plan all the Midwestern states would buy into.

“The nature of states, and I speak as the former Commissioner of Economic Development for Minnesota, is competitive for those jobs, for those new business opportunities,” Dayton said. “So the notion of us all working cooperatively together, to benefit all of us, is a concept that I think needs to be developed.”

Iowa’s governor said the states should focus on touting things they have in common, like “low cost” electricity.

“We can point out to business decision-makers if you want to locate a factory where you’re going to have low-cost, reliable energy that is, in some cases, more expensive than labor — this is a great place to do it,” Republican Governor Terry Branstad said during a late morning news conference.

The governors, however, did not directly address the competition among the states to land the next big deal, like the $110 million package of incentives the State of Iowa just offered an Egyptian company that promises to build a fertilizer plant in southeast Iowa rather than in Illinois. Brownback — the governor of Kansas — did suggest he wants Iowa to join with Kansas and other Midwestern states to “jointly market” the Midwest to foreign investors.

“Particularly China,” Brownback said, “particularly with the assets and the connection that Iowa has with the leadership and their interest in investing in hard assets in the Midwest.”

Brownback came to Des Moines last February to attend the “state dinner” Governor Branstad hosted here for Xi Jinping, the man who is expected to become China’s next president. Xi’s connection to Iowa stretches back to 1985, when he was a low-level party official visiting the state with a delegation of Chinese.

The chief executives from Kansas and Minnesota were the only two current governors who joined Iowa’s governor today in Des Moines for the Midwest Governor’s Association meeting. A few former governors from other states attended, as the group is celebrating the 50th anniversary of its first meeting.