You are here: Home / Education / Number of schools missing the mark on federal education standards increases 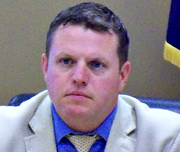 The number of Iowa schools going on the list for not performing up to the standards set by the federal No Child Left Behind education law jumped dramatically in the latest report card released today.

Iowa Department of Education director, Jason Glass, spoke with reporters just before the release of a new report.

“Eight hundred out of one-thousand-380 public schools or 58% or our schools, missed A-Y-P or adequate yearly progress, this year. And that’s up from…37.4% in the previous year,” Glass says.

But the state’s top education official says the numbers are misleading because the standard used to measure the schools this year have increased. “Our Iowa core standards are benchmarked against international high-performing systems. The standards are more rigorous than previous versions, so the increased rigor of the assessments is one reason for the increased in the number of schools that are not making their proficiency targets,” according to Glass.

Glass says the No Child Left Behind Law’s assessments are “flawed and inflexible” as he says they do not take into account the progress schools have made, and instead try to “blame and shame” schools into improvement.

“So we have schools in Iowa that arguably performing better than they ever have been, yet using the calculation methods prescribed in this law, we’re increasingly going to be putting more schools on these Schools in Need of Improvement and Districts in Need of Improvement lists, and that’s only going to ratchet up in the next year,” Glass explains.

“Eventually, just about every school in the state is eventually going to be on this list, which I think begs some questions about the further sustainability of this law,” Glass says. He says one of the problems is that the law singles out districts that have disproportionate numbers of low income students who require more assistance.

“When we were working on our waiver application last year, we equally balanced how much growth schools were getting with the number of students who were getting across the proficiency line in the calculations,” Glass says. “And we saw dramatic changes, just looking at raising the value of growth in that calculation dramatically changes which schools we are calling success, and which schools we are blaming and shaming.”

Glass cautioned reporters not to compare the raw numbers of schools on the federal watch lists to the same numbers from last year. “What we shouldn’t be comparing is the percent proficient on last year’s assessments and the percent proficient on this year’s assessments, because the assessments have become more difficult. It’s a test normed to a higher set of expectations,” he says. “… our schools aren’t dramatically worse than they were last year, as this data would indicate.”

Under No Child Left Behind, schools are first placed on the watch list, and then the sanctions move up to what could be an eventual state takeover of the school if they continue to be on the list. Glass says it’s nearly impossible now for a school to get off the list once they are on it.

You can see a copy of the report card here: 2012 State NCLB Report Card PDF