You are here: Home / News / Governor says Iowans have a lot of reasons to give thanks 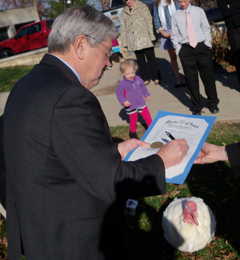 Governor Terry Branstad will read a Thanksgiving Day proclamation this morning during a service at a Des Moines church where parishioners dress in period costumes worn by the pilgrims.

The governor says there are still many challenges facing the state during this holiday season.

“Well, it’s been a challenging year because of the drought, but you know it’s pretty amazing agriculture production turned out to be better than expected, and Iowans are pretty resilient people,” according the Branstad.

Branstad says everyone will be praying for more rain to end the drought, but says overall the state has weather the down economy better than other areas of the country.

“I just want to say that we want to wish everybody a very joyous Thanksgiving. This is a time to say thanks for the blessings we have had,” Branstad says.

“And we in Iowa, because of the strength of agriculture have, really been blessed. We have not been hit as hard as some other states financially.”

The governor says there are positive signs for the future with the new state unemployment numbers showing a drop, and several recent announcements of business expansions. “So there’s a lot of good things going on, a lot of good things we can be thankful for, and I just want to wish everybody in Iowa a very wonderful and joyous Thanksgiving and holiday season,” Branstad says.

The governor made his comments during a ceremony where he pardoned two turkeys for this Thanksgiving.