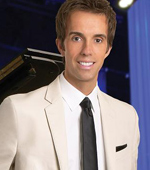 The man who calls himself “Iowa’s Pianist” is launching a series of Christmas concerts across the region this weekend to benefit an eastern Iowa charity.

Monticello native Jim McDonough will open his 10th annual “Holiday Grand” tour on Saturday in Ottumwa and Sunday in Des Moines, with more dates to come.

“I am joined by my 14-piece orchestra, I have eight singers and dancers, a full stage set where it snows on stage,” McDonough says.

“It’s a Christmas production show that happens around a nine-foot concert grand piano.” The Wartburg College graduate says the Yuletide season is truly a time for joy.

“I love Christmas music,” he says. “Something unique about Christmas music, it’s the only time of year that grandparents listen to the same music as their grandchildren. It appeals to all generations and we’ve certainly kept that in mind when we’ve produced this show.”

McDonough has released 15 CDs featuring Christmas music, love songs and patriotic selections. He has just announced he’ll be playing in Washington, D.C. “I’ve been invited by the chaplain of the United States Congress to perform at the U.S. Capitol sometime in the next year,” he says.

All proceeds of McDonough’s concerts benefit the work of Camp Courageous in Monticello, a year-round camp for Iowans with disabilities. In addition to shows this weekend in Ottumwa and Des Moines, more concerts are scheduled during December in cities including: Dubuque, Cedar Rapids, Davenport and Cedar Falls.