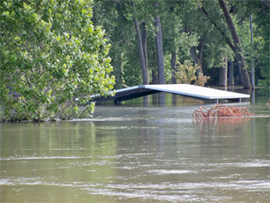 Shelter under water during 2011 flooding.

A popular state park in western Iowa will reopen later this week, 20 months after record flooding forced its closure.

Chris Anunson, park ranger at Wilson Island State Recreation Area, says the park was abandoned in April 2011 as the Missouri River spilled out its banks.

“We were forced to move everything out of the park – all of our office equipment, everything we could,” Anunson said.

“When the water was at its peak, it covered 99-percent of the park. As a result, we were forced to demolish some of the buildings in the park.”

Standing water remained in the park for three months. A massive layer of sand and sediment was left behind. “We had anywhere between three inches to eight feet of sediment deposit,” Anunson said.

Anunson, his wife and three children moved to a rented in home in nearby Missouri Valley for a year as their residence in the park was fixed. The home’s basement took in seven feet of floodwater. Although the Wilson Island State Recreation Area will reopen to visitors this Friday (December 14), the campground will remain closed until sometime in 2014.

Prior to the flood, the Wilson Island campground was the sixth highest revenue producer among Iowa’s state park campgrounds. Anunson said frequent visitors to the park will definitely notice some changes. “We’ve removed, as of this Fall, about 105 large cottonwood trees that were damaged by the flood. We are slated to remove another 70 trees this Winter and that doesn’t include all the small saplings that were under eight inches in size,” Anunson said.

The State of Iowa provided $2-million and FEMA nearly $1-million toward the food cleanup effort. The 544-acre state park, named for former Iowa Governor George Wilson, is located about 25 miles north of Omaha/Council Bluffs. Anunson estimates more than half of the park’s users come from Nebraska.