You are here: Home / News / Leader says Racing and Gaming is ready to regulate internet poker 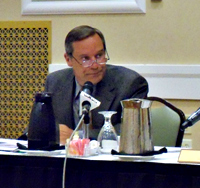 The chair of the body that already regulates the state-licensed casinos says they are ready to add internet poker regulation to their duties.

Iowa Racing and Gaming Commission chair, Jeff Lamberti of Ankeny, says they are ready because he thinks they have to be.

“That’s really where the next step in gaming is moving. We’ve seen some states approve it and are moving in that direction. Actually our administrator is very knowledgeable and did a paper regarding internet poker specifically,” Lamberti says.

The Iowa Legislature has not yet approved internet poker, but Lamberti says they can handle the job of overseeing its operation.

“If the legislature tells us that they’re going to authorize that and we need to move forward, we want to do like we do with our current facilities, is have a high level of integrity, regulate it so the people who engage in that can trust the product,” Lamberti says.

“So if that’s what the legislature decides, we will regulate it, and hopefully, regulate it well.” Lamberti was asked if the regulation would require more employees.

“Well it kind of depends on what happens in that industry, we might. But I don’t think we know exactly what the model is exactly going to look like — is it going to be a centralized model, is it going to be in several casinos? Until we know the model, I don’t think we know the answer to that,” according to Lamberti. He says he is confident that if online poker goes ahead, they will get enough resources from the state to regulate it properly.

Iowa Gaming Association executive director, Wes Ehrecke, says his organization has an idea of how the system would work. “We’d like to have it offered through the website portals of the casinos on a platform regulated by the Racing and Gaming Commission so you’re assure that when you play that we can keep the minors out,” Ehrecke says.

He says there is advanced technology to keep minors out and let you know when you are playing out-of-state, and it would allow you to play in other states. Ehrecke says there are some 150-thousand Iowans who now play on-line poker on sites hosted by other countries.

“And if you’re playing on one of those, if you had a straight flush and win five thousand dollars and didn’t get paid, who do you go complain to if the site is in Antigua,?” Ehrecke asked. “That wouldn’t happen if it’s regulated by the Racing and Gaming Commission and offered through our casino platform.”

Lamberti and Ehrecke made their comments during the taping of the Iowa Public TV program “Iowa Press.” The show will air on December 28th.