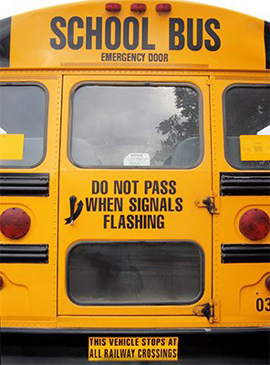 Steve Gent, the director of the DOT’s Traffic Safety Office, says the study is encouraging overall.

“One of the things that came out of the study is that school buses are one of the safest vehicles out on the roadway today, so parents should feel good about the safety of their kids riding school buses,” Gent says.

“So that’s really important to know, and it’s just an important thing.”

More specifically, the study examined the use of cameras on school bus stop signs. Gent says 20 districts use the cameras.

“When a school district has the cameras on the bus, it will actually take pictures of a vehicle going around a stopped bus. Those cameras have been found to be effective as long as the school district shares that information, lets people know they are doing it, and certainly when it helps with the conviction,” Gent says.

He says convictions are much easier to get when there is a picture available. The study looked at requiring buses to only stop on the side of the road where a student’s home is located. Gent says many districts already try to do that and the study suggests that districts continue trying to do that without recommending a requirement for same side stops.

Another safety suggestion could help raise awareness without as much cost. “One of the low-cost safety measures that the study found is adding a second stop sign more near the rear end of the bus. And that really helps for people coming up behind the bus, that stop sign is right there and more visible than the one that is up by the driver,” Gent says.

The new “Kaydn’s Law” on bus safety was named after seven-year-old Kadyn Halverson of Kensett who was killed on May 10th of 2011 as she attempted to get on a school bus. The law increases the minimum fine for people who pass a stopped school bus to $250.

But Gent says the study found an issue with the new fine. “The study found that there’s a pretty high number of judges who actually have imposed lower fines than that 250-dollar fine, and so it’s something that certainly the courts need look at and just need to understand and know that there was a law change,” according to Gent.