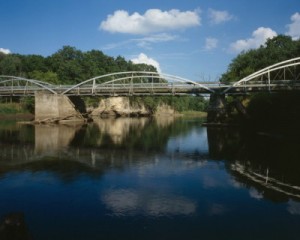 An eastern Iowa state park that’s more than nine decades old could become the state’s first-ever park to be designated as a National Historic District.

Dennis Murphy, park manager of Wapsipinicon State Park in Anamosa, says the park contains a host of unique features, plus, it was created entirely by inmate labor.

“Back in 1920, the men’s reformatory was going to log some of the woods from a local farmer but the citizens of Anamosa didn’t want it to happen,” Murphy says. “They got together, raised $20,000 and purchased the land from this lady and then turned around and just donated it right to the state.”

It marked the first time in Iowa history, Murphy says, that community residents made such a donation for the creation of a state park. Inmates from the state prison in Anamosa were put to work in converting the forest into a beautiful public park. Their handiwork is still very evident.

“All the roads were laid out by the prisons, we have two stone arch limestone bridges that are still intact,” Murphy says. “We have an old dam that was used to feed into the swimming pool that was down there. The swimming area is not there but we still have the limestone walls and the dam is still in place.”

The 400-acre park contains a host of stunning features, including limestone bluffs, long hiking trails and caves to explore. Among them is Horse Thief Cave, which legend says was once a camp for two horse thieves. Murphy says there are also 11 archaeological sites in the park that date back more than five-thousand years.

There’s also the restored Hale Bridge, already on the National Registry of Historic Places. This bowstring bridge, placed by helicopter, is the only three-span bridge left in Iowa.

For all of these reasons, Murphy says the Jones County Historic Preservation Commission is pursuing the National Historic District designation. With that, the state could apply for federal grants to restore some of the park’s facilities.

“Most of the times you hear of the historic districts as being in the cities, for their downtowns, for the squares because that’s where everything was,” Murphy says. “This is actually the whole park wanting to be designated. It was one of the first ever to be donated and it was done by inmate labor to develop it.”

Wapsipinicon State Park, named for the river that runs through it, would be Iowa’s first state park designated as a National Historic District and among the first in the nation. Murphy says the application process is underway and the title may come in 2014.