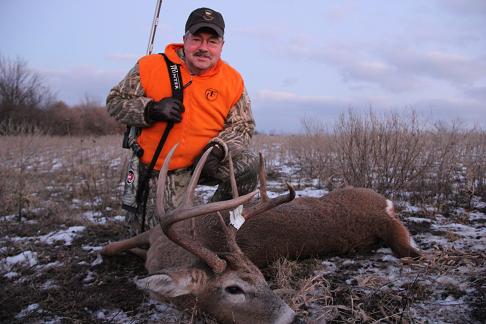 Governor Terry Branstad was one of the sportsmen at his annual deer hunt who snagged a trophy this weekend.

“I did get an eight-point buck at about five o’clock Saturday afternoon,” Branstad told reporters this morning, “so (I’m) pretty excited about that.”

For non-hunters, that means Branstad shot a male deer and the antlers branch out to eight ends or “points.” The hunting ground was in south central Iowa, in Decatur County, south of Leon.

“And this is all on film, by the way,” Branstad says. The video of the Governor’s Annual Deer Hunt is not yet available, but there are photos, one of which you can see above. Other photos are posted on the governor’s Facebook page. Branstad was part of a large group of hunters.

“This was the Governor’s Deer Hunt, which we’ve reinstated,” Branstad says. “And we had a number of — I think 14 or 15 hunters and a lot of guides. My son, Marcus, was one of the guides and landowners and many others that helped in it.”

However, Branstad’s not claiming his eight-point buck was the high point of the weekend. Branstad and Lieutenant Governor Kim Reynolds talked about the event at the governor’s weekly news conference.

“The best thing was on the Friday night banquet Kevin Reynolds gave us the blow-by-blow description of the black bear that he shot with a bow and arrow in Wisconsin,” Branstad said.

“That was really the highlight of the whole thing, really,” Branstad said, laughing. Lieutenant Governor Reynolds added: “That was right before I said, ‘He’s the quiet one of the couple,’ and once he got the microphone it took us about 15 minutes to tear him away from it.”

Branstad has shot two other bucks; one last year and one in 1996.

“This is the biggest one I’ve ever gotten so I think I want to have this one mounted,” Branstad told reporters. “…I think it will probably go in the small conference room.”

The room is on the ground floor level of the statehouse, in the governor’s suite of offices, but not accessible to the public. A reporter asked whether that small conference room would be cramped quarters for a large deer head.

“Well it’s not that huge, but listen! We have some of the best white-tailed deer in the whole country in Iowa and this is good!” Branstad said, his voice and laughter growing louder and louder during his answer. “But it not a trophy buck by real hunting standards. It’s an eight-point buck, but let me tell you, there are bigger ones out there!”

Lieutenant Governor Reynolds joked that the room will now be called “The Small Game Room.” Branstad plans to pair this new buck head with an antelope head that is a trophy from an African safari the governor went on several years ago. According to the governor, his wife “prefers” these trophies from his hunting exploits be housed outside of the house they share.

“We’re trying to keep peace in the family, too,” Branstad told reporters. \

Listen to Branstad recount his hunting exploits here in the mp3 of his 22-minute-long weekly news conference. He begins talking about the hunt at the 12-and-a-half minute mark.